Many of those modelling the NSW scene will be familiar with the excellent AndIan Models BLV kit, and those who have built it or are building it now will know that if you wish to use Kadees you have to notch out part of the headstocks to accommodate the coupler. This presented a problem for me as I had a hard time finding the courage to cut into the very headstock which is well detailed compared against other HO scale NSW outline kits such as the AR Kits MLV and Silvermaz TRC. Indeed I have spent month after month putting off cutting into the headstock until today when I found some offset shank Kadee couplers hiding in my parts box and some 40 thou styrene sheet. After a few minutes of fiddling, I had a solution!

After a trip to Liverpool on Saturday I was geared up to do a bit more at the workbench, so here's today's progress.


First up was the scratchbuilt models of CK681 and FK911, formerly the 1884 State Cars that I purchased at the Liverpool exhibition have received Kadee couplers and some minor repairs to the roof of CK681.


Next up was an unassembled Bergs LV kit which was also picked up at Liverpool was mostly assembled. I decided to leave the roof off before making some modifications to help the styrene roof stay in shape and fitting of couplers, etc. The model will also receive additional underfloor detail.


Hot on the heels of the LV was the fitting of bogies and couplers to a whitemetal Bergs GLV which will be decalled as a 2nd contract LLV before modification and recoding as a GLV.


Then, to finish up the night, I started putting together a Bergs 1959 BCW cattle wagon I've had for ages but never done anything with. Might as well, rather than leave it gathering dust.

That's it for tonight.

So it's been far too long since I last actually logged in here (for a short while I'd actually forgotten about this blog), so here is an update.

The rebuild of 42213 into 42220 is progressing slowly, with the unnecessary grills having been removed and the location of the additional grill marked out (hopefully I've got it right) 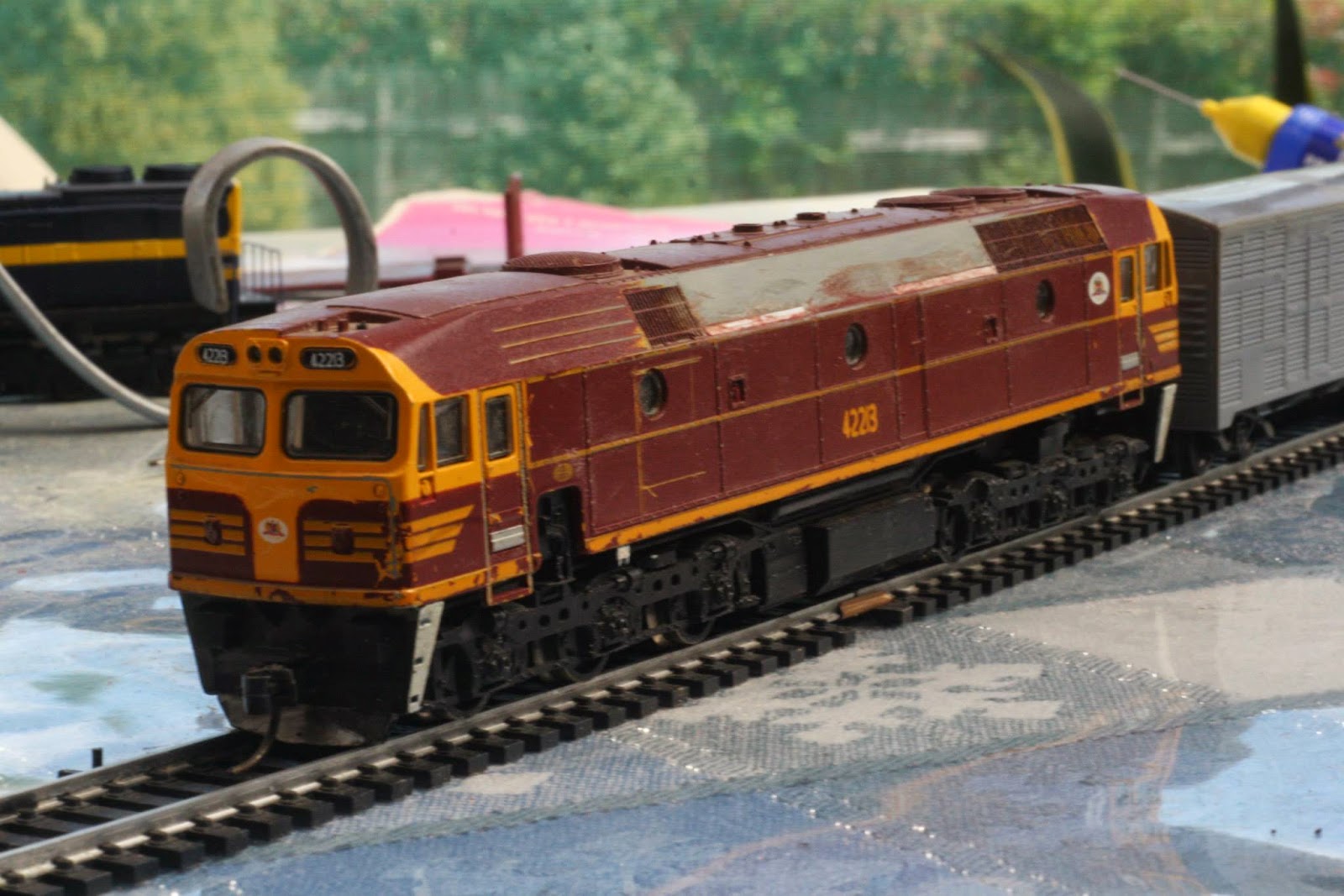 A couple of other projects have since arrived on the workbench as well since the last update. Among these has been a challenge from a fellow railway modeller to scratchbuild or kitbash a passenger carriage, which has led to the decision to model L393, formerly Russell First Class Saloon No.17, the first bogie passenger car in NSW, as it was in department service C.1957, when it was rebuilt with an underframe from a Thow BHG goods brake van. Fortunately the prototype still survives in close to c.1957 condition at the Goulburn Roundhouse Museum. I would like to thank the staff at the museum for allowing me to measure it up for this model.

Other projects that have arrived include an aborted BRS buffet car conversion from another modeller. It has now had the three windows blanked out while it now sits and I suss out a donor to fill the gap left by cleaning up the half windows which need to be redone.


More recently a brace of HGM and GP open wagons have arrived with a CFX 2nd class Pullman and a trio of Lima 12 wheelers with some broken crownlights and other small ailments, among them one suffering an underframe and roof hot glue gunned in place. All have now been dismantled and will undergo surgery to rectify the broken crownlights. 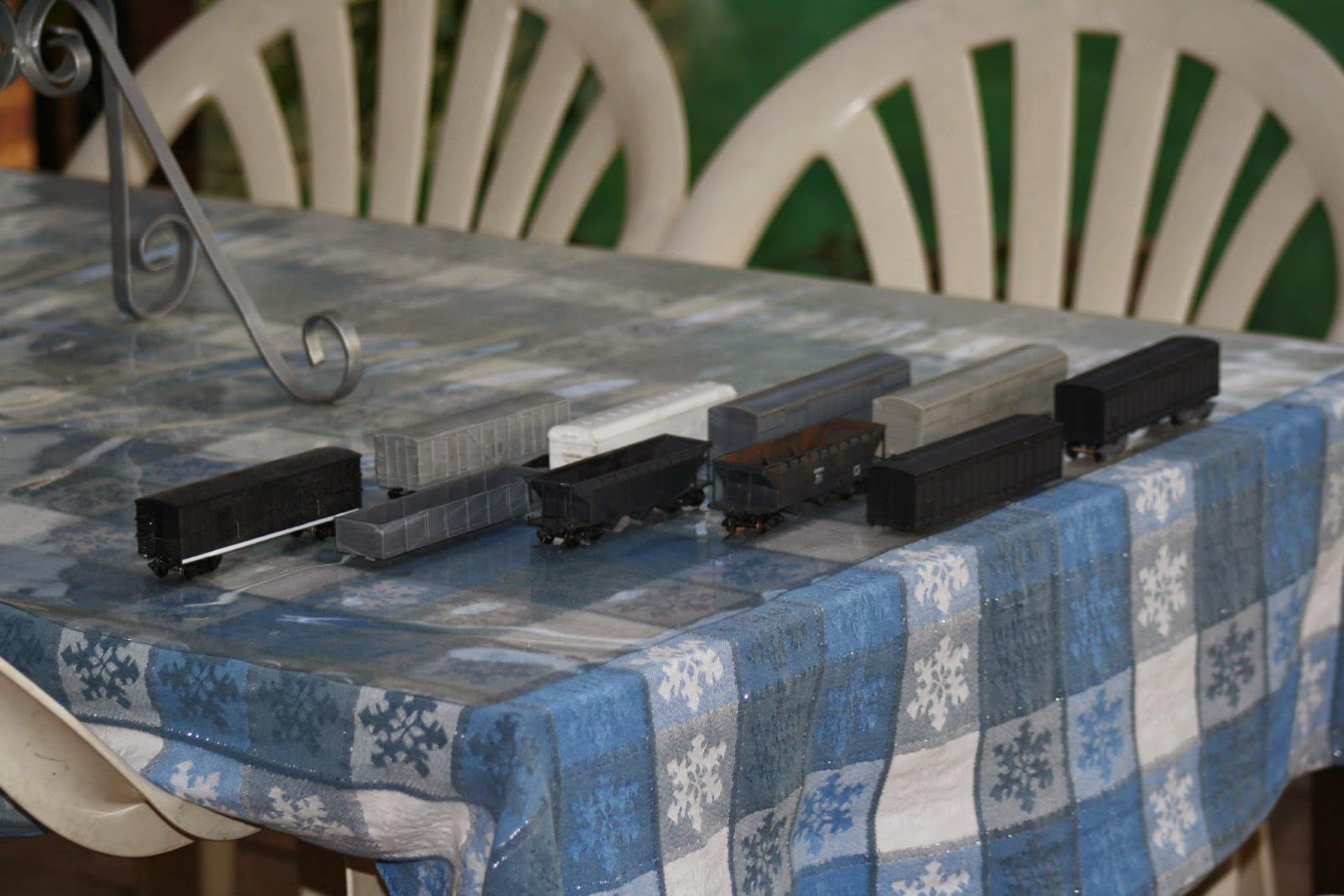 In the time since my last post, I've also become involved with 12 inch to the foot railways, volunteering at Lithgow State Mine Railway and this Saturday just gone, had the honour of being part of the team that fired ex BHP diesel loco D34 into the life for the first time since going into open storage at Steelhaven loco depot. Video of the occasion can be found here, thanks to Peter Durrant for uploading the video to the LSMR Facebook group.

And in case you're wondering what happened to that Kingswood that's provided so much distraction, it's still there, slowly being restored. 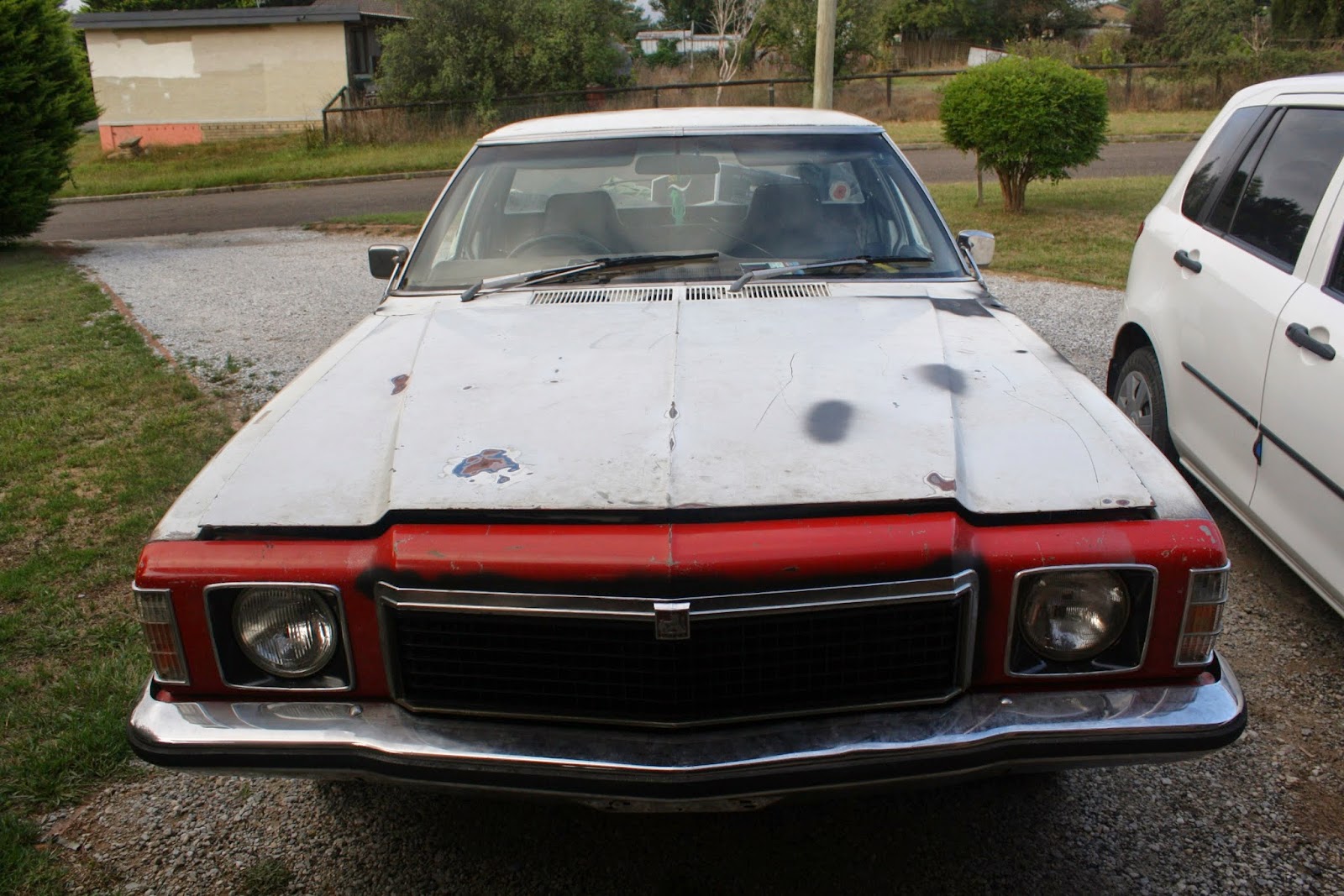 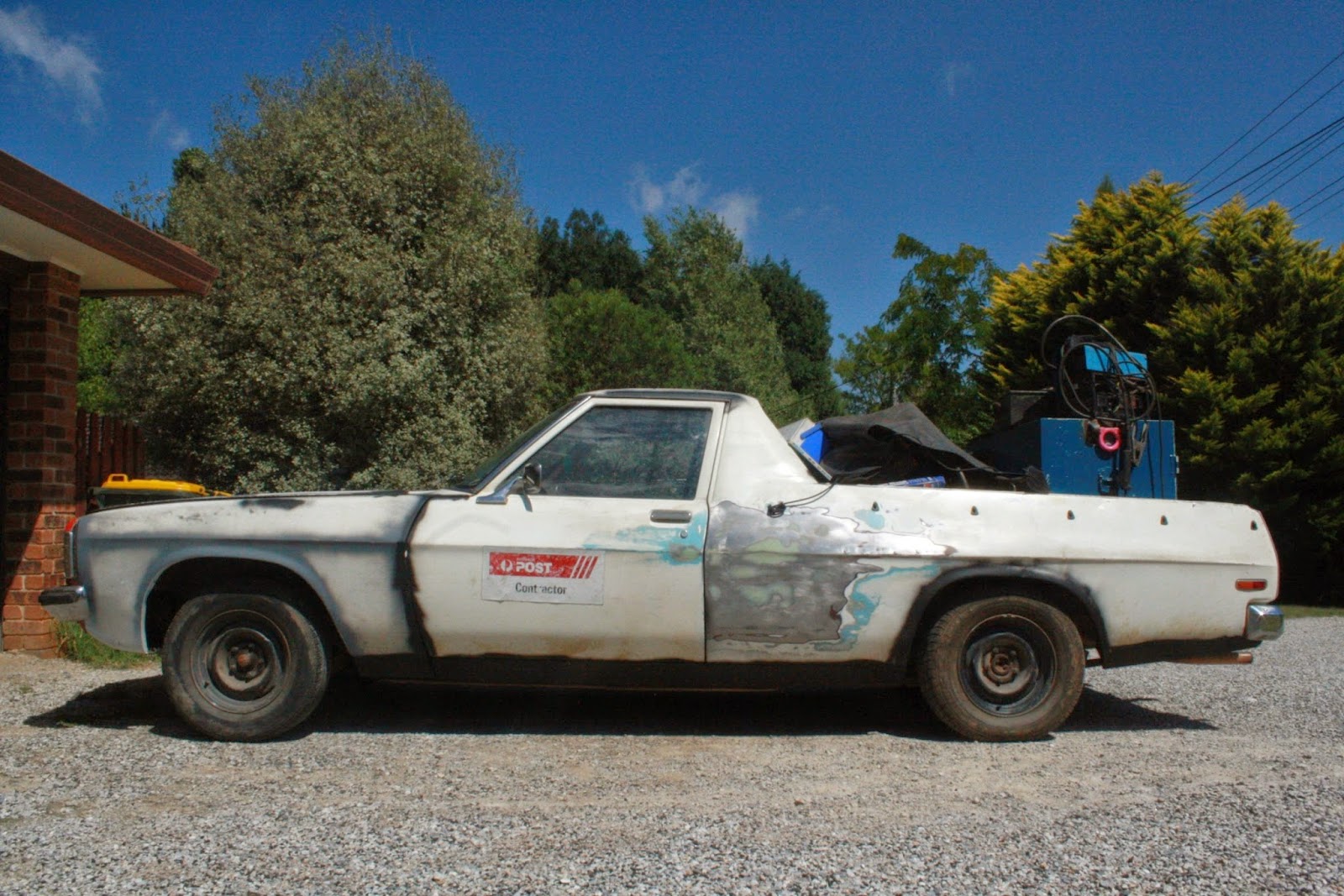 So it's back to the grindstone now. Happy modelling.

G'day all. Another year has nearly gone now and unfortunately I've not had a chance to post any updates lately, largely due to becoming involved in another hobby, classic cars. Recently much time has been dedicated to getting a my old holden ute back on the road.

Back to the workbench now though while I try and source some parts for the Kingswood.

Murringo has also now acquired it's first cars as well, a 1948 Holden 48-215 (FX) sedan and a 1957 Chevrolet Belair. The FX just needs some people in it, while the Belair will require a bit more work and will be the subject of a future post.

The staff at the workshops mean while have been on a vanning craze of a different sort on Murringo. Five bogie louvre vans have been undergoing work to join LLV 9958 and others on the waiting line for the paint bay. These include 2x AR Kits MLV vans, 1x Redfern Models semi louvred MLV, 1x IDR Castings fishbelly MLV and 1x AR Kits GLV which will become a second contract LLV. The second and third LLV contracts were recoded to GLV with strengthening of the underframe. First contract vans remained as LLV as their rivetted underframes did not allow for the strengthening done to the 2nd and 3rd contracts which had welded underframes.

The sides have now been removed from the Lima MFE body and the first of the doors for the ACS project separated. Hopefully this weekends should see some more notable progress on the cut and shut stage of construction. 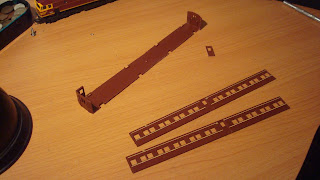 One of the carriages that will be run on Murringo will be an ACS composite sleeper, which I will be converting from a Lima MFE in future. However the ACS requires two doors from a donor MFE. I have two cars, however it seemed a true shame to hack up a whole carriage for just two doors. A discussion with James McInerney lead to a solution being formed. Convert a 72'6" MFE into a 50'6" FG second class sitter.

Six of these centre door saloon cars were built on the underframes of BKG horseboxes in November-December 1942 to counter a coaching stock shortage. Unlike any other class of carriage in NSW, the FGs had no first or composite counterpart. Seating capacity was 28 persons in each saloon on either side of the central doorway in a 3-2 seating arrangement, except the rows adjacent to the doorways and end vestibules which had a two person seat either side of the aisle. The seats came from N type cars which had been requisitioned to form an ambulance train. The FGs were built as independant carriages to bolster services. More info and a plan can be found in the December 1982 issue of AMRM.


Now, onto the conversion,

The plan is mostly cut and shut, however the differing ends, means scratchbuilt ends will be needed. The centre doors also need to be altered at the top to give them the rectangular profile of the prototype. The leftover parts can be set aside for a future project.

While at MRNSW28 I purchased a GSV kit from the Casula Hobbies stand. Upon getting it home and examining the contents I discovered some of the bars on the sides of the kit had become broken for what ever reason. I am now considering about replacing all the bars with brass wire, as this will be an exhibition model and at the same time, correcting the height issues with the sides and ends. What is the opinion of other bloggers/modellers out there?

Would like to say I had excellent time at the Modelling the Railways of NSW convention this year, despite the nerves of presenting for the first time. It was great to be able to go and give something back into the hobby and come back having met many like-minded people and learned a great deal myself. Thanks to all those who helped make it an excellent day. I am looking forward to going again next year; hopefully with something else to contribute.
Posted by Evan at 7/24/2011 06:08:00 PM No comments:

LLV 9958 ready for the paintshops

It's been a long time since my last post shortly after Christmas, but despite work and other facts of life, LLV 9958 has finally been completed and is now awaiting a tin of NSWR gunmetal grey and decals before entering Murringo's operational ranks. Here are some photos of LLV 9958 straight off the workbench (the glue is still wet!). 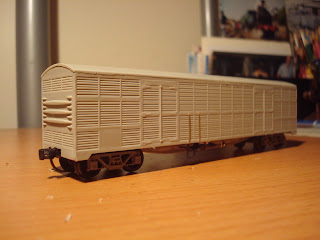 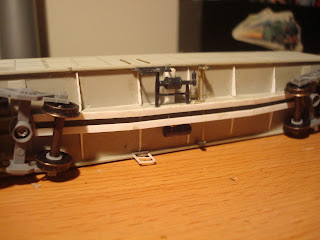 Good progress was made today on LLV 9958 with the completion of modifications to the underframe and assembly of the sides and ends of the van. Tomorrow work on detailing the body will begin. 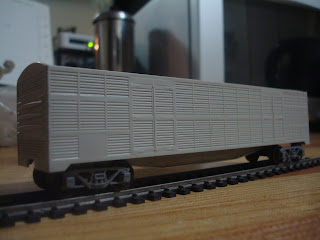 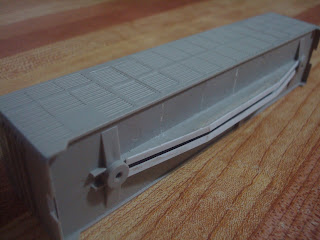